I suppose I should give a quick introduction since this is my first post on this blog!  Hi, I'm Katie Muhtaris.  I teach fifth grade and this year I have been lucky enough to have a one-to-one iPad program in my classroom.   Although this is my first official post on the iPads at Burley blog I have been blogging for several years as a way to reflect on my teaching, share resources and effective practices, and celebrate this amazing profession.  The post below is a repost from my other blog and is from the fall.

I've been experimenting with how to use the iPads in my fifth grade writer's workshop.  I decided to try it out by launching a unit of study using my document camera, student iPads, and Edmodo.  Usually we study a wide variety of mentor texts so that we can understand what the genre is and students can begin to notice good things that they want to include in their writing.

I showed projected articles and talked through them while students responded on Edmodo.  I gave them one question and asked them to put their thoughts in the reply section.  As the students typed their comments in I told them to post a comment and then go back and see what their classmates had written.  I also told them that they could participate verbally at any time, so we had a bit of a mix of talking and typing going on.

Plus: Everyone was participating

Minus: I wasn’t really getting the quality of responses that I was looking for…yet.  Twenty-nine kids on one discussion…too much!

Here is the first part of our discussion, with student names removed.  You can see that they start picking up on some of the elements such as title and illustrations. 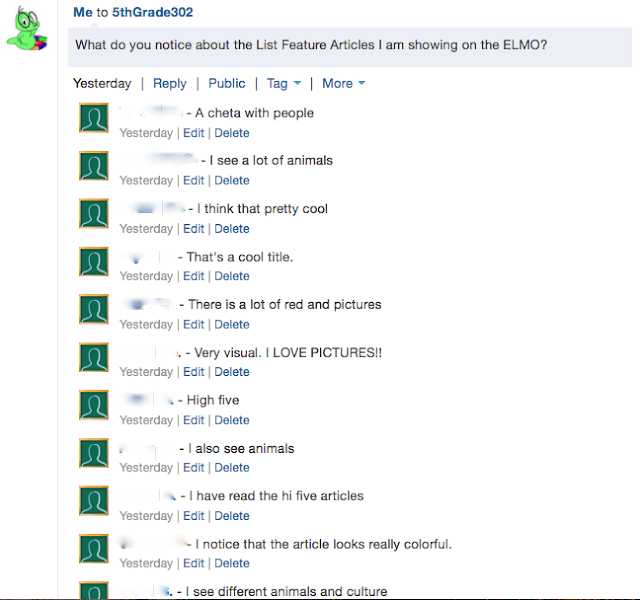 As I monitored what comments the students were making I began to ask questions and respond to them verbally in order to prompt them to go deeper.  Here are some other comments from that discussion.


I notice that there is a lot of little text boxes and not one big one.

Students began to see that the article was visually and graphically organized as well as organized in the writing.  This was one of the reasons we chose this genre, to help students learn to organize.


Yeah wait why is it called high five?

They began to look at the creative details such as creative title.  High Five is a feature in Faces Magazine every month.


I like the author’s use of alliterations : five fascinating facts

They weren’t noticing much of the writing style so I made the above comment to get them thinking of it.


Started a little intro saying what your gonna learn. =]


The writer was bringing the reader in

When the conversation got too big I started adding new questions to help them focus more.

This went on for awhile,  with me prompting students to compare and contrast the articles and notice new or different characteristics as I shared various examples.  Some students got tired of trying to type so they just jumped in and shared verbally while others seemed to prefer the rapid fire conversation on Edmodo.


What I liked about this was that it provided a way for everyone to be engaged and participate.  Although they might have been too engaged and I’m wondering if they were really able to attend to the most important parts of the conversation.  I think a debrief where we use the work we did to create a class chart would help summarize the most important elements of the genre.

One thing I did at the end of class was to post a question about topics.   I asked everyone to toss out some thoughts on what they might write about because I know generating ideas is a huge struggle for many students  They put together a huge list of things and I think this might have been the best part of the lesson because at the end of the day it will be the most helpful.
Posted by Katie at 9:33 AM No comments: 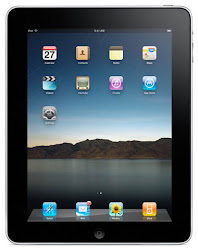